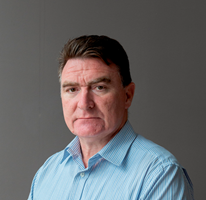 Ged Griffin has been a member of Victoria Police Force for approximately 32 years and is currently an Inspector at the Capability Department. He has performed duties in general operations, disaster management, marine policing, criminal investigations, intelligence and counterterrorism operations. He has performed a wide range of international roles including duties at the UN Serious Crimes Unit (Timor Leste), Victoria Police Contingent Commander and as Liaison Officer supporting the former Victorian Premier Hon Mr Steve Bracks during his work assisting the new government of East Timor.

Ged was involved in establishing the Victoria Police Counter Terrorism Coordination Unit and was the project manager responsible for replacing Victoria Police’s metropolitan analog radio network for a new state-of-the-art digital radio network. Ged actively researches new and evolving technologies that impact on police operations and public safety and is regularly invited to conferences around the world to speak about his work.

Ged is also a member of the Australian Civil Corps and has been a Team Leader for the Post Disaster Response Team. He has also conducted assessments in the Asia‒Pacific region regarding national disaster risk management arrangements on behalf of the Department of Foreign Affairs and Trade.

During 2015 Ged took leave from Victoria Police to establish and manage the Centre for Disaster Management and Public Safety at the University of Melbourne. In 2016 he was invited to take on a role as a Visiting Fellow at the Australian Institute of Police Management in Sydney, New South Wales. In 2017 he established the International Critical Control Room Alliance with a number of colleagues involved in public safety communications.

Sensors, smart cities and the implications for critical control rooms